You are here: Home / Coffee Stories / Starbucks Expands in India Despite Slow Start 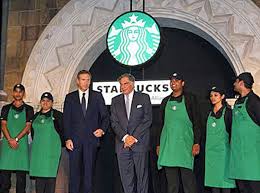 Starbucks has stated that despite it’s slow start in India it plans to continue its expansion.

For more than a month now, the New Delhi Connaught Place Starbucks has been open, and draws large crowds on a continuous basis. Starbucks stores in India are being opened in conglomeration with Tata Global Beverages. Starbucks and Tata originally planned to have 50 stores opened across the country by the end of 2012, but so far only 9 have been opened in Mumbai and New Delhi. Despite this slow growth, Starbucks has stated that they plan to continue forward with their plan to make India one of its top 5 markets.

Avani Davda, CEO of Tata Starbucks, states “It comes with it’s own set of issues, in terms of how fast the government can move on the reform side. But, I think still, the fundamental business potential is there and if you are a group like Tata or Starbucks, who conducts business in a certain way and understands the potential of the market, I think there is huge opportunity over here.”

India has a continuously rising middle class, about 300 million currently, and a younger population with a grown western taste. In an effort to reduce inaccessibility in India, the pricing for drinks is significantly lower than the US or China. However, in a country that has always been primarily tea drinking traditionally, trying to convince customers to purchase coffee instead of tea can be difficult.

Davda states “Younger people, they are open to experimentation. They are not just hung up on or tea or a particular beverage.  Yes, it has been a dairy and a tea market for a long time, but I think people want new experiences and their out-of-home consumption habits are different.”

Starbucks remains confident, however, with India’s coffee consumption increasing by 80% in the past decade and the coffee market in the south Asian country’s predicted 500 million dollar market growth within the next few years.