You are here: Home / Coffee Stories / Stroke Risk in Women May be Lowered by Coffee 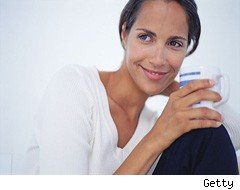 Women who enjoy a daily dose of coffee may like this perk: It might lower their risk of stroke.

Women in a Swedish study who drank at least a cup of coffee every day had a 22 to 25 percent lower risk of stroke, compared to those who drank less coffee or none at all.

“Coffee drinkers should rejoice,” said Dr. Sharonne N. Hayes, a cardiologist at Mayo Clinic in Rochester, Minn. “Coffee is often made out to be potentially bad for your heart. There really hasn’t been any study that convincingly said coffee is bad.”

“If you are drinking coffee now, you may be doing some good and you are likely not doing harm,” she added.

“These sorts of epidemiological studies are compelling but they don’t prove cause,” said Dr. David S. Seres, director of medical nutrition at Columbia University’s College of Physicians and Surgeons in New York.

The findings were published online Thursday in the American Heart Association journal Stroke.
Scientists have been studying coffee for years, trying to determine its risks and benefits. The Swedish researchers led by Susanna Larsson at the Karolinska Institute in Stockholm said previous studies on coffee consumption and strokes have had conflicting findings.

“There hasn’t been a consistent message come out,” of coffee studies, said Dr. Cathy Sila, a stroke neurologist at University Hospitals Case Medical Center in Cleveland.

For the observational study, researchers followed 34,670 Swedish women, ages 49 to 83, for about 10 years. The women were asked how much coffee they drank at the start of the study. The researchers checked hospital records to find out how many of the women later had strokes.

There were a total of 1,680 strokes, including 205 in those who drank less than a cup or none. Researchers adjusted for differences between the groups that affect stroke risk, such as smoking, weight, high blood pressure and diabetes, and still saw a lower stroke risk among coffee drinkers. Larsson said the benefit was seen whether the women drank a cup or several daily.

“You don’t need to drink so much. One or two cups a day is enough,” she said.
Larsson, who in another study found a link between coffee drinking in Finnish men who smoked and decreased stroke risk, said more research needs to be done to figure out why coffee may be cutting stroke risk. It could be reducing inflammation and improving insulin sensitivity, she said, or it could be the antioxidants in coffee.

Larsson and others point out that those who want to reduce their chances of a stroke should focus on the proven ways to lower risk: Don’t smoke. Keep blood pressure in check. Maintain a healthy weight.