You are here: Home / Coffee Stories / Leaf Rust Outbreak in Central America is Worst in Decades 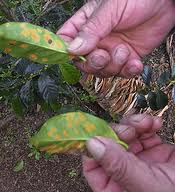 The leaf rust problem isn’t going away, unfortunately. It continues to grow and wreak havoc on local farms and exports from Central America. Estates in Nicaragua, Mexico, and all over Central America have reported large outbreaks. Political leaders are trying to curb the outbreaks.

The international weekly journal of science has described the outbreak as the worst anyone has seen in more than 40 years:

The fungus first emerged as a significant problem by 1869 in Ceylon — now Sri Lanka — before spreading around the world. Stuart McCook, a historian at the University of Guelph in Canada who studies the rust, says that the wet weather in some areas of Ceylon was ideal for the spread of the fungus, and more than 90% of coffee crops were wiped out in those regions. Faced with an economic catastrophe, the country abandoned coffee for the tea it is associated with today. The disease is so universal that it “is not going to be eradicated; or the only way to eradicate the disease in practice is to eradicate all of the coffee”, says McCook.

By 1970, the fungus had been detected in Brazil, and severe outbreaks were seen in Costa Rica in 1980 and Nicaragua in 1995, says Jacques Avelino, a plant pathologist at Costa Rica’s Tropical Agricultural Research and Higher Education Center, based in San José.

But changes to management practices had brought the disease mostly under control. “Coffee rust was considered a solved problem by most of the coffee growers and coffee institutes of the region”, says Avelino. “People didn’t fear the disease.” The outbreak may have taken hold because of patchy use and effectiveness of fungicides.