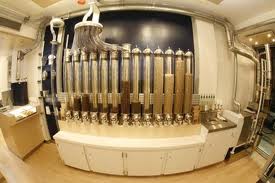 Roasting Plant, located in Detroit on Woodward Avenue, has a very interesting way of roasting their beans. If you visit the roastery, you’ll find a series of computerized clear tubes that transport a dozen different types of beans between a roaster, a network of silos, and ultimately the grinding and brewing machines behind the counter. If you order a small coffee, not including roast time, it takes about 60 seconds to complete.

Compressed air pushes these beans through the clear tubes quick as lightening – so fast that they’re hardly seen, but they are heard. “The beans literally fly over the customer’s head,” said Elizabeth Rose, store operator. “I know, it’s kind of wild.” Steve Delfuoco, a local customer, says “This is really unique. It looks more like a mad scientist’s hideout than a coffee shop.” This Detroit location is the third installment of the Roasting Plant, with other locations in New York.

With a bold coffee invention such as this, of course they have patents. Mike Caswell, a former Starbucks ‘director of profit improvement’, developed this contraption over a period of sever years – starting with his grandmothers vacuum cleaner. He opened his first shop in Manhattan in 2007, and a year later opened one in West Village.

Rose says that the Detroit location was started when a local Detroitian, Dan Gilbert, saw the video of the unique tubing system and invited Rose and other Roasting Plant heads down for a tour of his city. Detroit is now considered a ‘flagship’ store and is the model for future expansions in other areas of North America.