Apparently, 7-11 has Presidential Election predictions down, just by selling coffee in their 7-Election campaign. 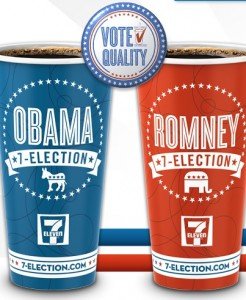 When customers buy coffee they are given the option of selecting a red cup for candidate Romney or a blue cup for Obama, upon checking out the bar code on their presidential selection is scanned. Be it an unconventional campaign predictor, 7-11 has had remarkably accurate results in the past 3 campaigns:

(Note: In this election year, 7-11 tallied unmarked non-partisan cups in it’s results. They no longer do this.)

7-11 CEO, Joe DePinto, remarked in a press release “While we have never billed 7-Election as scientific or statistically valid, it is astounding just how accurate this simple count-the-cups poll has been — election after election. We have had a lot of fun with it, and I hope we have encouraged people how important it is to vote in the real election.”

For customers who don’t wish to participate or are undecided, there is an unmarked, or “undecided” cup available for use. It’s important to note, however, that the majority of customers choose to use the candidate cups.

7-11 tallies the results at the end of each day and posts them on their website. So far, Obama appears to be in the lead with 60% vs. Romney’s 40%. It will be interesting to see how accurately 7-11 predicts the results of this 2012 Presidential Election.