You are here: Home / Coffee Stories / Well, this isn’t right… 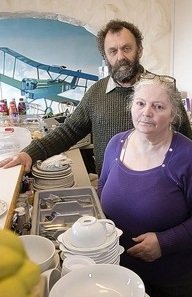 This couple, John and Christine Reynolds, have run the Lands End Airport cafe for the past four years, and just found out their business was being replaced by a coffee chain – but they found out via reading a local Cornwall newspaper. Coffee Republic was running an ad seeking permanent staff to run the airport’s new cafe. Now, they have been given 27 days to vacate the premises, and claim they have since been shunned by staff.

To make matters worse, John, 63, discovered this news just weeks after undergoing surgery to remove a kidney with a cancerous tumor. “We had the bus driver come up to us and say, ‘Have you seen The Cornishman? There’s something in there that you might like to see. I drove to St Just, got a Cornishman and there it was. I was gobsmacked, so I ripped it out. I came back, told Christine and she just burst out crying.” says John.

When John and Christine originally took up tenancy, it was on a trial basis, but they have now been running it for four years and have spent more than £3,000 on improvements. The couple had put in an offer to run the new cafe in the new terminal, but never heard anything every time they asked. Then the next thing they saw was the ad in the newspaper.

They have currently taken up legal discussions with the airport operator in order to seek either a six month notice period or compensation to cover loss of profit and stock.

John continues, “They just don’t seem to care; nobody lets us know what they think. Previously, we thought we would be able to move from this one into the new café, and a lot of our customers wanted it. They’re angry about the way we’ve been treated.”

An airport rep says of the situation “As part of the Land’s End airport investment, the company undertook a tender process to run the on-site food and drink operation and we can confirm that discussions are ongoing with Coffee Republic which has been selected as our preferred operator. We would like to thank the Reynolds for the period in which they were tenants at the airport. We’re also sorry to hear about Mr Reynolds’s illness and we wish him well.”