You are here: Home / Coffee Stories / The Closing of 15 Coffee Factories 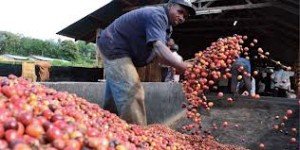 15 coffee factories in the districts of Luweero, Kiboga, Mubende, Mpigi, Gomba, and Mityana have been closed down by the Uganda Coffee Development Authority. The factories were closed down due to poor hygienic efforts by the factories and its employees, poor coffee handling methods, and operating without licenses.

The UCDA’s principal technical officer, Erias Ayiga, said “Our coffee exports have continued to drop simply because farmers have failed to follow our advice of adapting to the recommended practices. As UCDA, we have played our role of sensitizing farmers and demonstrated the benefits that comes with proper coffee handling, but I must say that we have been let down by stakeholders who want quick money.”

The agency has partnered with local police to ensure policy’s and procedures are strictly upheld “We have equipped all the police posts in the countryside with information regarding the recommended coffee handling practices and the 1994 coffee regulations. They are now in better position to arrest the culprits,” said Ayiga. “We launched the task force after several warnings from western countries about their intention to ban our coffee for five years.”