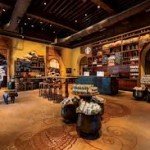 [adsense] In a land where tea has always reigned supreme, coffee is now making a big name for itself. India's love of tea still stands strong, but coffee is now a strong choice for consumers. Starbucks launched its first store in Mumbai in October 2012, and has launched three more since then, but it appears to be moving a bit more slowly than its plans in China and Vietnam. … END_OF_DOCUMENT_TOKEN_TO_BE_REPLACED