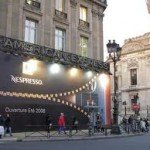 [adsense] Nestle is being sued in Paris by Ethical Coffee Co. Ethical Coffee is claiming that Nestle's Nespresso brand engaged in a "smear campaign" against its rival. Claiming "systematic smear" effort on Nespresso's part, Ethical Coffee filed suit yesterday. They claim Nespresso was trying to steer clients away from the competition through unethical and even illegal … END_OF_DOCUMENT_TOKEN_TO_BE_REPLACED