You are here: Home / Coffee Stories / Starbucks Wants Everyone to Love Blondes 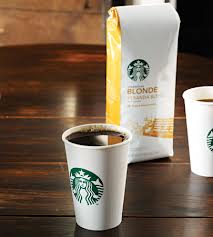 Starbucks launched its campaign yesterday in an attempt to sway everyone to the blonde side. They are inviting customers to try the Blonde and Vanilla Blonde roasts at select locations after signing up for their app and obtaining a coupon for a free tall cup of Blonde roast. You could also send a coupon to a friend through Facebook’s e-gifting. *They have since run out of the coupons*

Starbucks is also opening pop-up stores in several big cities such as Boston, Washington D.C, Chicago, Dallas, and New York, and offering free cups of the Blonde roasts and dollar off coupons to go towards purchase of one of the two roasts.

This campaign is targeted towards the upwards of 40% of coffee drinkers that claim to prefer lighter roasts, as compared to Starbucks’ traditional darker and richer roasts. If successful, this area of the market is worth a potential $1 billion.