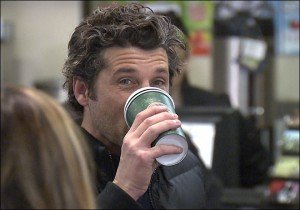 After TV star Patrick Dempsey’s company won the bid for Tully’s auction with their bid of $9.1 million, Starbucks is saying “Wait, not so fast.” Starbucks claims the star unfairly charmed auctioneers into winning auction. Along with their other silent investor, who put a bid up of $10.5 million, Starbucks has accused Dempsey of creating a scene that “may have impeded financing for qualified bidders and creates the appearance that its bid was favored”. It has put in a request to Judge Karen Overstreet of the US Bankruptcy court in Seattle to reject Dempsey’s bid, which was lower than Starbucks.

Dempsey has the full support of Tully’s CEO Scott Pearson. Pearson gave is support in court papers filed on Thursday, stating that Dempsey’s acquisition would keep the chain in tact, save 480 jobs, and customer’s could still use the over $5.4 million worth of unspent gift cards. He also stated “Many Tully’s customers strongly prefer, and paid for a Tully’s product, as opposed to Starbucks.”

Green Mountain Coffee also backs Dempsey’s win of Tully’s because they want to protect its sales pipeline. Green Mountain is Tully’s exclusive roaster, and if Starbucks was to take over the Tully’s name would be wiped from the  buildings and Green Mountain would be sold no more in the stores.