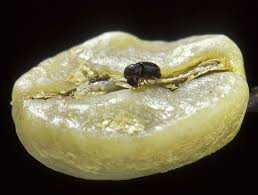 While Central America is battling the leaf rust problem, Hawaii is not without their own coffee issues. Hawaii produces around $30 million a year in revenue off their Kona coffee industry, however the coffee berry borer is hindering this currently.

“This could kill the industry an industry that’s taken 100 years to build up could be gone in 5 or 10 years unless we get a handle on that,” said Jim Wayman, Hawaii Coffee Company President.

The pest arrived in Hawaii 3 years ago, however it was only affecting about 10% of farms at the time. Today, it is affecting 100% of the farms in Hawaii and destroyed 28% of coffee crops in 2012.

Experts are saying the coffee borer is pretty impossible to eliminate completely, and are saying instead control must be maintained. Farmers need to strip trees and ground unused berries after harvest. They also need to cut down feral coffee trees that are near farms and spray a natural pesticide to kill as many borers as possible.

Stuart Nakamoto, Professor and Extension Economist with the College of Tropical Agriculture and Human Resources at the University of Manoa states,

“It’s going to be a pest you have to live with so if nothing else keep it under control. It’s one of the worst pests in the world for coffee growers. I think Kona coffee is a great product. It is always going to be here to stay. Hopefully able to control the berry enough to make a go at it. Support the local growers by trying to purchase local products.”

Currently there is a bill in place at the State Capitol that will spend half a million dollars to search for new methods of treatment and prevention. They are also spending $330,000 to assist in controlling the borer’s widespread damage.