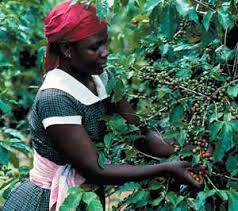 Kenya’s relationship with coffee didn’t start so easily.Coffee was first introduced to Kenyans by way of Arabs enslaving thousands of Kenyans to work on coffee plantations both in Kenya and Arabia. Unfortunately, this practice didn’t end when the British assumed control over Kenya. This practice of using Kenyans for labor was continued throughout the 20th century. However, there was a growing independant farmer population in Kenya. The British in response to this banned Kenyans from growing their own coffee, as well as introduced a tax on huts, and decreased the labor payments. This form of slavery didn’t end until the 1960’s when Britain relinquished its power.

Today, coffee is one of the most important cash crops in Kenya. It is both grown on large plantations and small scale farms. The total combined production annually is about 50,000 tons. About 250,000 Kenyans are currently employed in the coffee industry, however these coffee farmers are still among the poorest in the world. As of 2001, a farmer that produced a 1,007 kg crop would only earn £20.14 for his labor. The same coffee can then be sold for $10 plus per pound.

The coffees of Kenya are known to have a very bright acidity, with a full sweetness and a dry, or wine like, aftertaste. Some of these coffees can even have a black currant taste and aroma. Kenyan coffees are highly valued as some of the finest coffees in the world. Part of the reason that the coffees are so well produced is due to the government incentive programs that reward cultivators for producing high quality coffee. This leads to consistent improvements in the quality of the coffee. Before coffee is sent to market, it has to undergo rigorous testing by the Kenyan Coffee Board to ensure it’s up to par.

The main varietal of coffee produced in Kenya is Arabica, which thrives in the local rich volcanic soil, however recently a new hybrid plant called Ruiru 11 was introduced. Many coffee industry experts are wary of this hybrid because they believe it lacks a true Kenyan flavor and resembles that of a lower grade coffee from a different country. However, the Kenyan Coffee Board is trying to promote this coffee as an alternative to the traditional Arabica for farmers.

Kenya AA is one of the most well known coffees from the country. It is grown at elevations of 4,900 to 6,800 feet and is hailed as one of the finest Arabic coffees in the world. It’s attributes are a very full flavor, bright acidity, floral aroma, and berry and citrus notes.