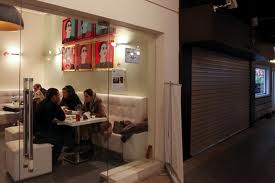 Iran’s presidential election draws near in June this year, and in light of this upcoming event local authorities have began ordering coffee shops to install cameras in their shops and then turn over recordings to the authorities upon demand.

When cameras started showing up in coffee shops, most people just assumed they had been installed for theft protections and security. However, it soon became public knowledge that this was not the case. It all started with the closing of Cafe Prague, a popular coffee house in Tehran that was frequented by stuudents, activists, and intellectuals. When shop owners were approached by Tehran’s morality police a few weeks ago, who insisted they install a minimum of four cameras in the shops to support efforts to tighten civic monitoring and security, the owners refused. The owners themselves made the decision then to shut down the cafe in protest of the new surveillance measures being taken. A statement posted on Cafe Prague’s Facebook page states, “We always knew this day would come and, in the midst of Tehran’s grimy winter, our end has finally arrived in spite of our many attempts to stay afloat. But as much as it pains us and as much as we will miss our friends and all of you who stood by our side in the past four years, we take comfort in knowing that we at least didn’t let Big Brother’s glass eyes scan and record our every step, minute and memory from dawn till dusk.”

It’s a sad loss for Tehran’s vibrant academic and cultural life. The cafe was known to offer a much valued atmosphere, filled with much more than just coffee, as it offered free wifi, hosted musical and political events, and supported local artists by allowing them to exhibit there. A local photographer, Amir Hossein, said of the closing “I have four years’ worth of memories in that café. I am sad that I didn’t spend more time there. Café Prague wasn’t just a café; it was like home, a safe haven for us to forget all our daily troubles and burden.”

Coffee houses have long been a haven throughout Iranian history, dating all the way back to the 9th century. Poets and artists of the like would gather safely in the cafes, free of fear of harassment by local deputies and authorities. After the revolution in 1979, many coffee shops were closed by the government who declared them a part of the “western cultural onslaught”. Coffee shops began flourishing again in more recent years, but many of the conservative religious leaders have been taking a stricter position against “foreign culture”. In July of last year, more than 87 cafes and restaurants were closed down due to suspicion of defying Islamic values.