You are here: Home / Coffee Stories / Finally, an Espresso Machine for the Car 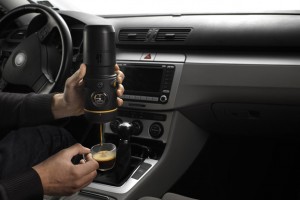 It’s 8:45 a.m. and you’re just getting into your car to leave for work. There’s no time for coffee—but you’ve never needed it more. A new espresso machine that plugs into a car’s cigarette lighter socket aims to give French drivers a cup of espresso wherever they are.

The Handpresso Auto is the newest addition to Fontainebleau-based Handpresso’s line of portable, hand-held espresso makers. Users plug the machine, about the size of a flashlight, into a cigarette lighter, add water, pop in a pod of espresso grounds (any brand is fine), and press a button. Water is pumped through the grounds at 16 bars of pressure—nine bars is typically considered the minimum—and the drink is ready in two minutes (click to see a video).

Some might consider front-seat brewing an accident waiting to happen. No laws prohibit this kind of drinking and driving, but the company encourages users to stop their cars to savor the espresso, says spokeswoman Catherine Nielsen, also the wife of Handpresso inventor Henrik Nielsen, who passed away three months ago, before this product hit the market.

Handpresso Auto started selling in France last month for €149—the first shipments go out in April—and the company will make a big push at the Paris Motor Show in September. As part of a viral marketing strategy, samples have also been distributed to cab drivers, who have received positive feedback from passengers so far.

It is premature to say when the product will be released in the U.S., Nielsen says, though she adds that because buzz from online networks and social media spreads slower in France, the company has actually received more inquiries from the U.S.

“I think the French will be just as interested in the product since they love espresso and drive cars a lot,” Nielsen says. “It’s just taking a little longer for that interest to manifest itself.”