Colombian coffee is one of the most well known coffee types in the world and is a favorite in many households, so much so that the United States, France, Italy, Germany, and Japan are it’s largest importers. This Arabica coffee boasts a distinctive full and heavy body, intense aroma, and a very bold acidity. This makes it a valuable addition to many coffee blends.

It is widely believed that coffee was first introduced in Colombia by the Jesuit priests around 1730, but there is another version of this where a traveler who passed through Venezuela and into Colombia introduced the coffee beans. After its introduction to the country, coffee crops began springing up all over the eastern part of the country. It took about 100 years after Colombia began growing coffee for the first commercial production to occur, which happened in 1835 and produced about 2,560 bags of green coffee. This coffee crop was exported, but coffee exportation from Colombia really didn’t start until the second half of the 19th century.

After succeeding so well  in global markets, with the US being the largest consumer, Colombian landowners became a bit greedy and began trying to exploit this success. Tobacco, quinine, leather, and cattle saw a giant increase in production in Colombia, however the attempts with these international exports proved fragile and went into a decline when international prices dropped significantly. This decline caused the failure of many Colombian large estates, and was certainly not helped by the Thousand Days War taking place at the same time. Plantation owners were simply not able to keep their plantations in good condition, and were marked by substantial international debt. Colombian plantation owners would rise again, however, this time with plantations springing up in west Colombia. Farmers saw great opportunity in the cultivation of coffee, as previously their land would remain unusable for long periods of time due to the slash and burn method of clearing crops. Over 500,000 farming families today generate income from coffee production. 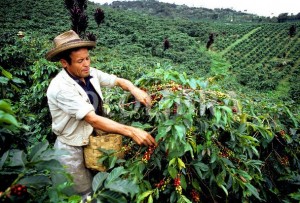 Beginning in 1980, however, Colombia saw a 1 degree Celsius increase in temperature and increased rainfall, which in turn dramatically shifted the production of coffee. Where Colombia was averaging 12 million 132 lbs bags before since 2006, in 2010 they only produced 9 million. Here’s hoping things turn around, as Colombian coffee is truly beloved worldwide and is widely relied on by the Colombian economy and families.