You are here: Home / Coffee Stories / Climate Change Insurance to be Offered to Colombian Coffee Farmers 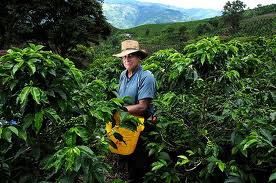 Now, small growers in Colombia will have insurance to protect their crops during weather changes staring in January. Andres Lozano, top adviser at the Colombian agricultural development bank, spoke to Reuters and said “The producer doesn’t have to pay for the insurance. This is money that comes from the government and the coffee growers’ federation. It will cover the value of the coffee plant but such value will depend on whether the plant is old or new. It is not the same to indemnify an old car from a new car.”

El Nino was a large cause of the climate changes, and then La Nina caused torrential downpours from April 2010 until present. Coffee production targets have been lowered as a result from 9 million sacks to 8 million sacks.

The insurance plan will cover farms that have been damaged as a result of hail storms, landslides, excessive rainfall, and extreme drought. This is per the Coffee Federation’s chief of marketing, Luis Fernando Samper. The plan is being financed with 30 billion pesos (16.5 million dollars), and 60% will be managed by Finagro. It will shield 96% of the countries 500,000 small growers who own less than 5 hectares (12 acres) of coffee plantation.