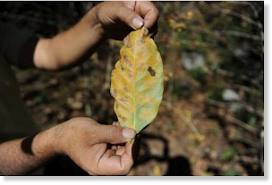 There’s a big problem being experienced right now in Central American coffee crops, and it goes by the name Roya, or ‘Leaf Rust’. Roya is a parasite that quickly spreads through coffee plants, discolors and dries up the leaves (thus the nickname) and can effectively destroy entire plants and crops if not dealt with swiftly.

In an area of the world where entire families often depend on the coffee industry’s profitability, this can be a very big problem. In September, two months before harvest, the fungus began spreading due to no preventative measures being taken, climate changes, and high temperatures and droughts. Over thirty-five percent of the crops have been effected so far, meaning a loss of about two million one-hundred pound bags of coffee – representative of about $300 million dollars of revenue lost.

“The situation is very serious,” Jose Buitrago, president of Nicaragua’s Coffee Exporters Association, told AFP. “It will get worse if measures are not taken.”

Local governments are trying to step in and assist in wiping out the problem, as many small farmers and co-ops don’t have the means to do so. They will prune infected leaves, put up shading systems, and replace the dead coffee plants with fungus-resistant strains of coffee seeds.

The countries are also looking for help outside, with Guatemala seeking $843 million in investments to renew coffee plantations, and Nicaragua seeking $200 million. Honduras and Nicaragua stand to lose the most out of all Central American countries if this problem isn’t dealt with swiftly and effectively. Even in Honduras, Central America’s ‘Coffee King’, ten percent of the crops have been effected by the fungus so far. In Guatemala, the fungus has reached sixty-seven percent of its plantation hectares – threatening to put 200,000 people out of work. Roya has also infected 30 percent of Panama’s 22,000 hectares of coffee plants. And in Costa Rica, Deputy Agriculture Minister Xinia Chaves said “Producers let their guard down. Costa Rica could lose more than 250,000 (coffee bags).”