You are here: Home / Coffee Stories / Bananas and Coffee Working Together in East Africa 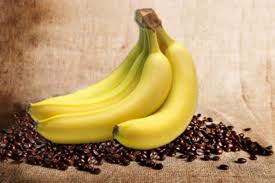 Interesting piece of news out of Dar es Salaam – growing coffee and bananas together apparently helps coffee plantations cope with the climate change. Actually, it helps in two different ways: Small farm owners are seeing an increase in revenue by growing coffee and banana crops together, and coffee is physically benefiting from being grown alongside bananas – a welcomed change after what its been going through with the climate change.

The IITA, or International Institute of Tropical Agriculture, released a study to East African Business Week after using climate models and analogues to predict the impact of climate change on coffee production. They sought to understand the possible future impact that climate change would have on coffee plantations in the East African Highlands. They found, much to everyone’s dismay, that the areas suitable for growing Arabica coffee will dramatically decrease in the future, potentially leading to a revenue loss of over 100 million dollars a year.

The report says “This is not only a threat to the countries’ foreign revenue, but it also puts at risk the livelihoods of millions of small-holder farmers depending on the crop.” It continued “In areas between 1300-1700 m, coffee will be severely affected if current farming practices that use traditional varieties and make limited use of water conservation and shade technologies remain unchanged.” Fearing that the area will over time become completely unsuitable for coffee growth.

Coffee is very sensitive to changes in temperature, and the hot climate, researchers found, is on the rise. Here’s where bananas come in: Banana trees can help shade coffee crops from the drought shocks and warmer climate. Research has shown that farmers who grew both crops simultaneously had a notable increase in income and a larger coffee output. Another plus found and reported by farmers is the reduction in pest related problems. Apparently, where there are coffee trees, there are less coffee berry borers, mealy bugs, and leaf rust.

Adding more shade to coffee plants does mean the plants require more nutrients in order to maintain soil fertility, so farmers will need to/and are changing how their soil is managed. However, it’s a small price to pay in comparison with the alternative.