You are here: Home / Coffee Stories / All Aboard the Starbucks Express! 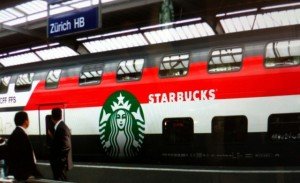 Redditor reports state that “the world’s first Starbucks on rails is currently being tested in Switzerland.” We think this is really neat, and are pretty jealous they aren’t being tested in the US. The shops aboard the train cars will be staffed by Federal Railways restaurant staff, and if they’re successful, Starbucks plans to move forward with more chains.

Previously, the same railway had attempted to do this with McDonald’s, with little success. The Starbucks car will be on the Inter-City rail line that runs between St Gallen and Geneva. We can’t see how this wouldn’t be profitable, seeing as most commuters would love access to freshly brewed coffee while on their way to work.

Investors, and future investors, are taking note as well. This addition to the Starbucks corporation could prove a very profitable one. Along with its current expansion in China, Starbucks appears to be heading full steam ahead into a great future as the leader in the coffee industry.